Advocate for Patients and Clients 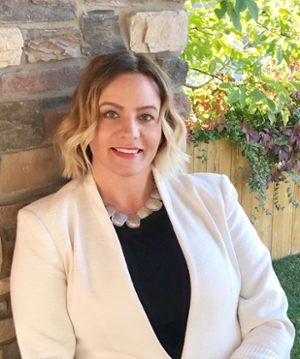 The daily degradations of dementia and Alzheimer’s disease take a toll not only on the patient, but also their caregiver.

Founder and CEO of Solstice Home Health, Hospice and Palliative Care Amy Hartman noticed the frustration among her clients a few years ago. In 2015, Hartman was pivotal in bringing the University of South Carolina’s Dementia Dialogues program, a series of training sessions that help healthcare workers prepare caregivers for their family members’ successive losses of cognitive function, to Utah.

“People who are in the throes of caring for a parent or spouse give and give,” Hartman says. “If you don’t understand why your loved one keeps trying to wander off, or why they’re becoming aggressive or verbally abusive, it can tend to devastate relationships.

“Just understanding what’s happening in their loved one’s brain can help caregivers to de-personalize some of what happens in the pathophysiology of the disease,” she adds.

Hartman’s work as a nurse entrepreneur on behalf of those suffering from dementia and their family members has earned her recognition as the University of Utah College of Nursing’s first Young Alumni Award winner.

Hartman grew up in Salt Lake City. Her father worked in finance and sales, her mother was a business owner. While the mother of a young son, she earned an associate’s degree in nursing from Salt Lake Community College in 1998 and worked as an acute care nurse for a few years before completing the College of Nursing’s RN to BS program in 2004.

The same year, she took a job as director of nursing at a post-acute rehabilitation facility and found her life’s work. Inspired by the in-home care she watched her grandparents receive, Hartman worked for several home health and hospice companies. Then in 2013, she decided to start her own—Sugarhouse-based Solstice. The decision, she says, was about providing high-quality, community-based care and empowering her nurses and doctors to “do things as they were meant to be done.”

“I’ve always been drawn to the idea of creating care that makes a difference in our patients’ everyday quality of life, health and wellness—keeping the geriatric population healthy and able to age in place,” she says.

“But it also was about providing a good place for nurses to work. Having healthcare from a nurse’s perspective is invaluable. That can get lost in other settings.”

Hartman is president of the Utah Hospice and Palliative Care Organization and a board member of the Alzheimer’s Association’s Utah Chapter, the state’s Alzheimer’s and Related Dementia Coordinating Council, and the Utah Association for Home Care.

Meanwhile, Dementia Dialogues’ reach around the state has increased. Alzheimer’s State Plan Specialist Lynn Meinor says the first session has expanded under the oversight of the Utah Department of Health. Two more annual sessions of the basic knowledge course have trained more than 50 healthcare providers and caregivers, including social workers and case managers. The five-county area in rural southern Utah holds workshops weekly. Meinor says the demand for such easily adaptable education programs will only increase as Utah’s population ages.

“It’s taken off,” she adds. “I can’t keep up with how many are being taught.”