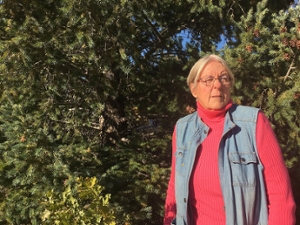 Kathleen Kaufman might have been a chemist--bent over a lab counter, working on quantitative analysis of plywood adhesive and oil and gas refinement.

But she liked people too much.

So when a lunchtime conversation with her chemist colleagues revealed high dissatisfaction with their jobs, Kaufman decided she needed to make a change. Six years after getting her degree in chemistry, she graduated with another bachelor’s degree in nursing and never looked back.

Now, nearly 40 years after that decisive career switch, Kaufman will receive the University of Utah College of Nursing’s 2017 Distinguished Alumni Award for her lifetime of work advocating for students, working nurses and their patients.

“Nurses are a vital force in healthcare and we need to be heard,” says Kaufman. “People have no idea what nurses do to ensure they receive high quality care and that patients’ rights are protected. We have a responsibility to share the knowledge we have.”

The oldest of 10 children, 67-year-old Kaufman grew up on dairy and beef farms in rural western Pennsylvania. Her father was a chemist, her mother a homemaker. They wanted their children to grow up in the country.

Kaufman studied chemistry at Grove City College, graduated in 1972, and worked for a few years testing plywood glues and at a secondary refinery. She considered veterinary school for a time. But when Kaufman realized she wanted a people-centric career, she changed to nursing and graduated from the University of Maryland in 1978. Her husband Jack Comeford’s job at Dugway Proving Ground in Tooele County ultimately drew the young family west and Kaufman enrolled at the College of Nursing, graduating with a master’s degree in physiological nursing in 1987.

She taught as a clinical nursing instructor for 24 years at LDS Hospital and Intermountain Medical Center. During her career at the college, Kaufman was known as a stickler for drilling clinical skills, nursing history and writing. Nurses need to have that basic knowledge down pat before they take on more complicated patient care, she says.

“I’m very interested in the quality of nursing. I want nurses to know what they’re doing and why they’re doing it,” Kaufman adds. “I want them to be very proficient.”

At the dedication of the nursing history exhibit on the college’s third floor in 2016, several of Kaufman’s student nurses credited her with changing the trajectory of their careers, or inspiring their approach to caregiving.

“Mentoring is such an important component of education,” says Lynn Park, an adjunct instructor at the college. “You need someone who builds you up, but makes sure you take responsibility for your own learning. Kathleen Kaufman is the reason I’m here. It’s all on this woman.”

Associate Professor Glenda Christaens said Kaufman taught by example. She described watching Kaufman hold a patient’s hand and stroke his temple. “I thought, ‘That’s the kind of nurse I want to be. I want to be a healer. I want to be someone who loves my patient and cares.’”

Kaufman is equally dedicated to reminding future nurses of the proud tradition behind their profession. For years, she dressed as Florence Nightingale for the college’s biennial Lamp of Learning ceremonies. Kaufman is the unofficial keeper of LDS Hospital’s—and the state’s—nursing history, including co-authoring a book, Celebrating the First 100 Years: LDS Hospital, 1905-2005. She has donated an extensive collection of nursing textbooks and history tomes that will be housed on the College of Nursing’s fifth floor.

“People need to remember that there were folks who came before them who were really pioneers and tremendously brave and very creative,” she says. “We’ve had many, many great leaders.”

Throughout her long career teaching future nurses, Kaufman also was dedicated to the Utah Nurses Association and its advocacy for the profession on Utah’s Capitol Hill. A one-time president of the organization, Kaufman now focuses on legislative health care issues and the Utah Nursing Consortium’s push for more funding for faculty. She figures it’s her responsibility as a nurse to share her knowledge and decades of experience caring for patients.

State Rep. Raymond Ward, R-Bountiful, says he expects to see Kaufman in the halls of the Capitol during lawmaking sessions. “When issues that relate to nursing scope of practice or nursing education are being considered, you can rest assured that Kathleen will be there to represent the voice of the nursing community and to bring her personal knowledge to the conversation.

“She has been tireless in her advocacy,” he writes, “and because of that, she has become a strong voice, able to push Utah policy in the direction of compassion for patients, to make sure that the voice of nursing is heard and treated with respect by Utah policymakers.”

Kaufman retired from the College of Nursing in 2012. Her husband Jack died of cancer in 2006. When she’s not writing letters to policymakers or testifying at the Capitol, Kaufman dabbles in competitive canning and plays with her two red-headed grand-daughters.