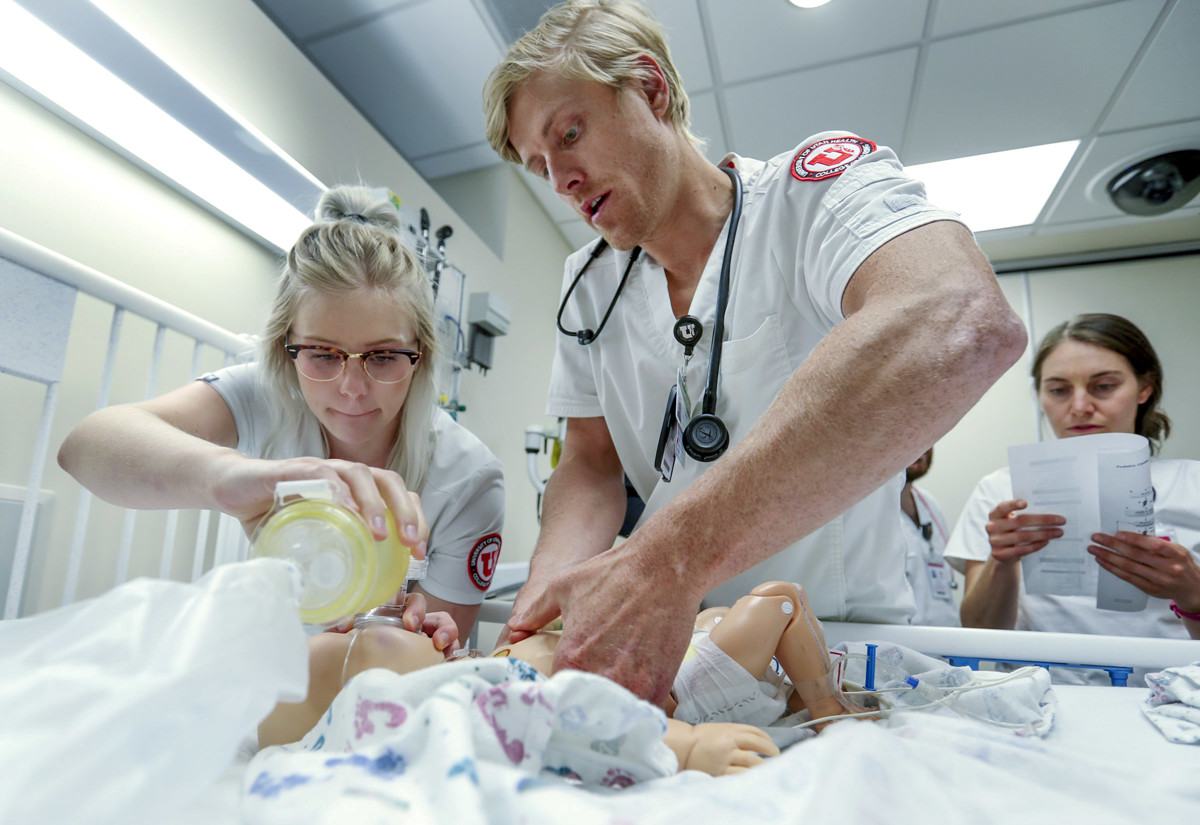 SALT LAKE CITY — A vulnerable newborn-sized figure lies on a medical table as several nurses bustle around the room and chest compressions are performed.

"Fast and even compressions," one of them reminds the group.

All does not go smoothly inside the room. The chest compressions are not done with a backboard placed under the patient's back, as they should be, and supervisors would later say the nurses should have checked more frequently for a pulse to see if their lifesaving efforts were helping.

"I just thought I went in really composed, and then I wasn't," one nurse would later admit to a superior.

This patient isn't a real child, however, but a lifelike device known as a high-fidelity mannequin, and the nurses in this scenario are in fact students at the University of Utah engaged in a hyperrealistic simulation designed to imitate critical medical situations as closely as possible. 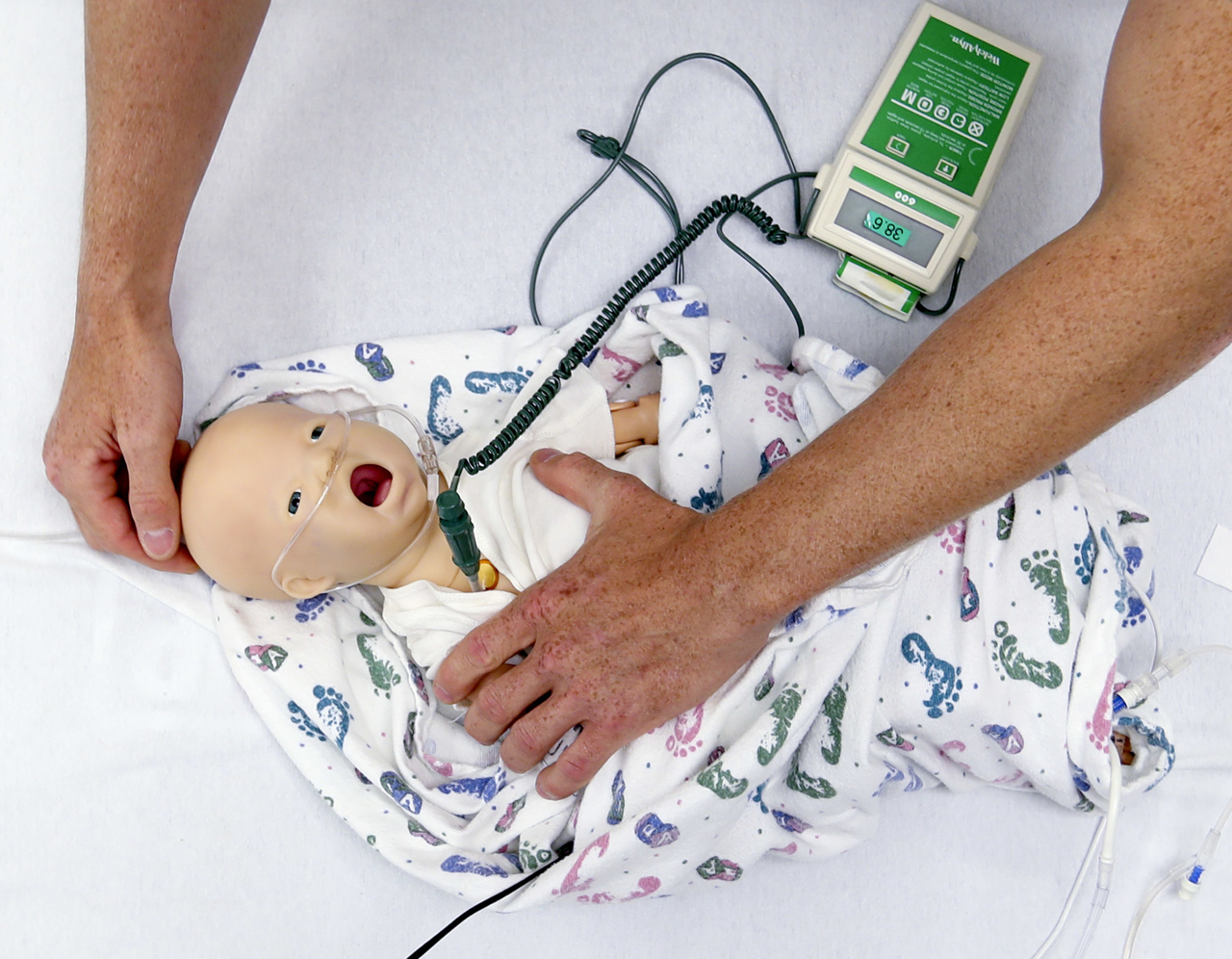 The students' baby simulator, named Hal, has provided them an opportunity to learn from their mistakes in a lifelike environment, preparing them for when they're face to face with a real person experiencing a similar medical emergency.

"In the classroom, you don't get to actually apply the skills you have learned," said Lauren Perry, a U. nursing student in her second semester of the program. "In this simulation, you get to apply your skills, and we also get to work together as classmates … and learn from our mistakes."

Hal is the size of a newborn and can display several humanlike behaviors, as well as vital signs such as a heartbeat and pulse. The $23,000 mannequin's lips can also turn blue, its eyes can blink and dilate, and the body can shake as though it is experiencing a seizure. It has no tethers or visible wires and can also respond to chest compressions, take medication and respond to medical equipment. 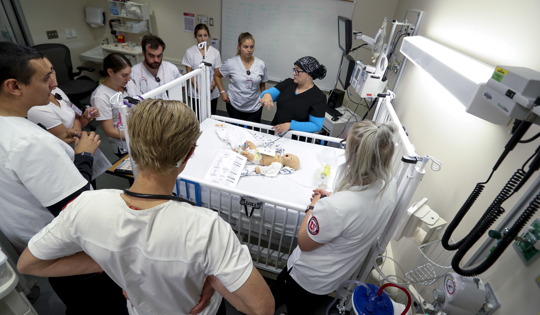 "All of us coming in with the mindset that this is a real patient really helps. I think that the College of Nursing has done a wonderful job at really trying to make it as real as possible," Perry told the Deseret News. "These simulations really give me in idea of what different situations I may walk into, and give me an idea of how I might react to them."

Advanced mannequins have been used at the U. since 2010, and students currently undergo 10 total simulations as part of their training in the university's nursing program. Other advanced mannequin models used by the program include a mother and an older child.

Every couple of years, the models are upgraded as the technology making them humanlike improves. Currently, a plan to purchase a brand new, $50,000 high-fidelity newborn mannequin is being considered, according to the U.

Professors rely on the mannequins to get a fuller idea of students' readiness for the medical field, said Sharifa Al-Qaaydeh, a clinical professor of nursing at the U. who helps direct the simulations from a control room.

"You can have a student that's very book-smart, but they get in the hospital and they're scared to death of … (going into) a patient room," Al-Qaaydeh said. "So it's very helpful for me to see where they're at, not just from the textbook but from a clinical standpoint."

Professors want the simulations to help students gain confidence that they can react appropriately in an unpredictable situation, she added.

"In the textbook, we teach them, 'In the ideal world this is what would happen.' But it's never like that in real practice, so we teach them to expect the unexpected," Al-Qaaydeh said. 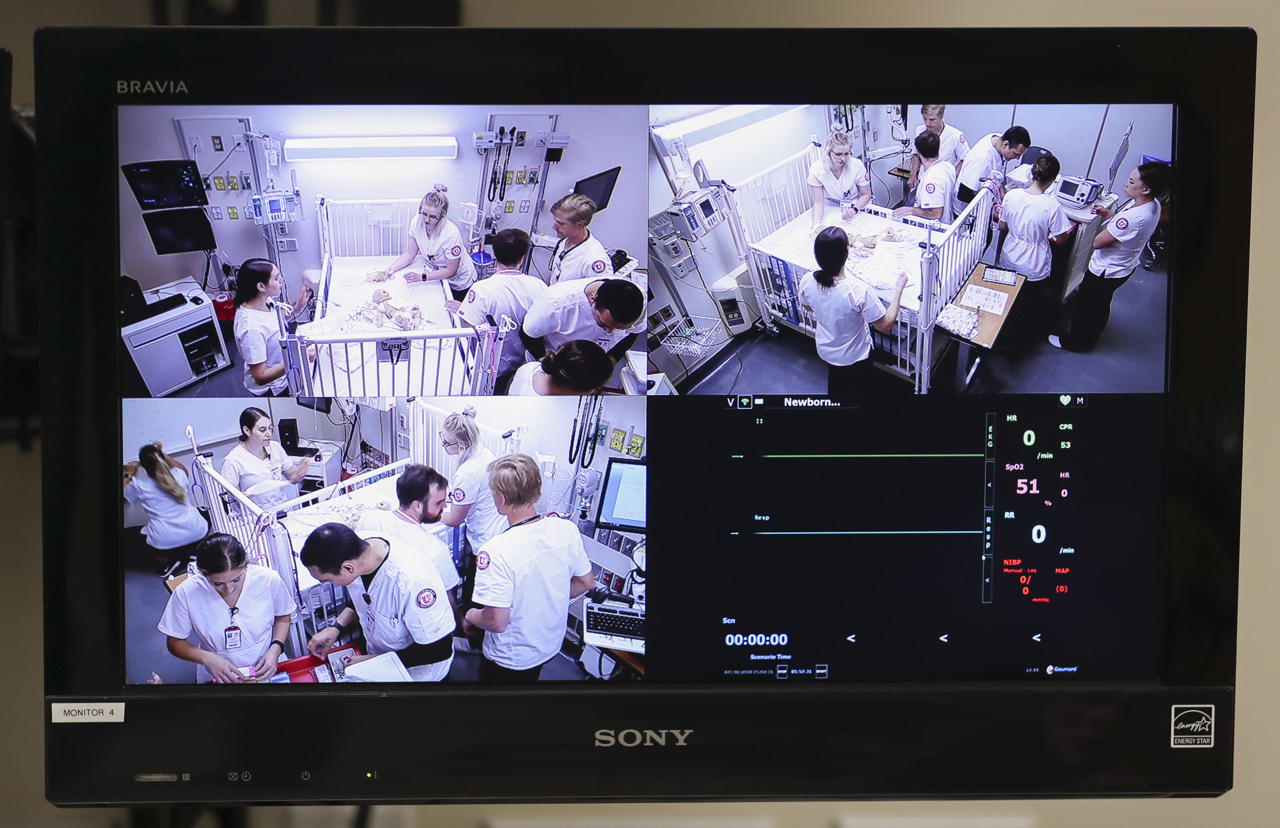 Photo Credit: Steve Griffin, Deseret News
Other scenarios used by professors include heart attack, sepsis and even a situation in which the patient dies. Besides mannequins, the U. also uses human role players to help students properly assess a person's medical problem, Al-Qaaydeh explained.

One of the most common mistakes students make is "medication error," in which several factors are at play in "calculating doses (of) medications or IV," the professor said.

"One of the things we tell them (is), it's OK to make mistakes here. This is where you make the mistakes, and then you go to the hospital … and you learn from those and you won't make those same mistakes," Al-Qaaydeh said.

Even before then, students' training with the mannequins goes beyond just what happens inside a single patient room. In each exercise they also review their simulated patient's medical chart beforehand in a separate location, at which point "we have time … to maybe brainstorm, 'OK, this is my checklist, this is what I plan to get done,'" Perry said.Toward the end of their time in the nursing program, students go through a simulation in which they are taking care of multiple patients in different rooms, "like a real hospital environment," according to Al-Qaaydeh.

Still, she added, "When you walk in the room, it may change in an instant."