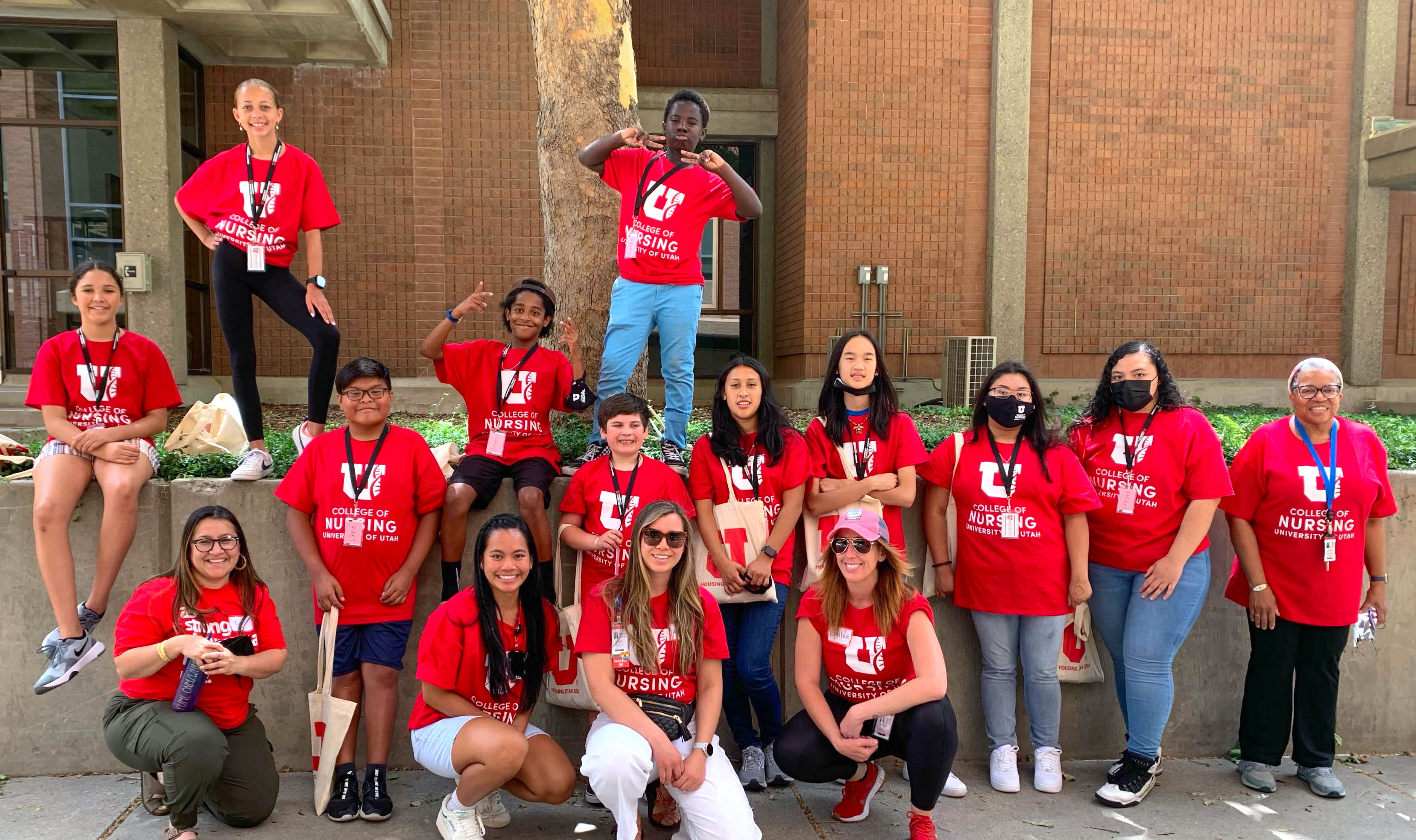 By the time most kids are fourteen years old, career conversations within the school system are already well underway. For some, these types of conversations are helpful. For others, the messaging can be detrimental—potentially impacting a student's current view of self and hindering future opportunities.

“What our research has found is that starting in high school, ethnically or racially diverse students tend to receive the message that college isn’t in their future, or that they can’t afford to go to college—messaging that their white peers don’t get,” said Emilee Cluff, former program manager of the College of Nursing Nursing Workforce Diversity Project.

In 2019, the College of Nursing (CON) received funding from the Health Resources and Services Administration (HRSA) to focus on building diversity in the field of nursing. The award, the Nursing Workforce Diversity Project (NWD), provided three years of funding for diversity, outreach, and educational projects within the CON. Cluff managed the NWD until the end of the funding cycle in June 2022. In November 2021, NWD committee members met to discuss plans for their remaining funds.

“We knew we had the funds to do something pretty spectacular in the community in the final months of the project,” said Cluff.

Director of Student and Community Engagement Sara Hart, PhD, RN, proposed an idea: a summer camp for racially and ethnically diverse middle schoolers across the state of Utah, with the goal to build relationships with future college students in underserved communities.

So did Cluff. She started to explore what it takes to host a summer camp and get the ideas off the ground.

“I had zero experience with this type of thing. I had never planned, executed, or even been involved with a summer camp. I contacted the Youth Education office on campus, and they said it was very unlikely that it would be a possibility with such short notice," said Cluff. “After I went over the details of what we wanted the camp to look like, they said, ‘this could actually work’.”

With the green light from Youth Education, Cluff “hustled and made the camp happen.”

Although Cluff is not racially or ethnically diverse, she used her personal experience as a first-generation college student to help her as she planned the camp.

“I relied heavily on that,” said Cluff. “I kept asking myself what would have been impactful for me when I was a kid and didn’t know anything about college or the opportunities that were out there.”

With the help of many, Cluff planned both fun and meaningful activities for the three-day camp, including lunch in the student union, tours of the dorms, a visit to the admissions office, a tour of the different affinity cultural groups student centers, and lots of time in the CON Simulation Center. 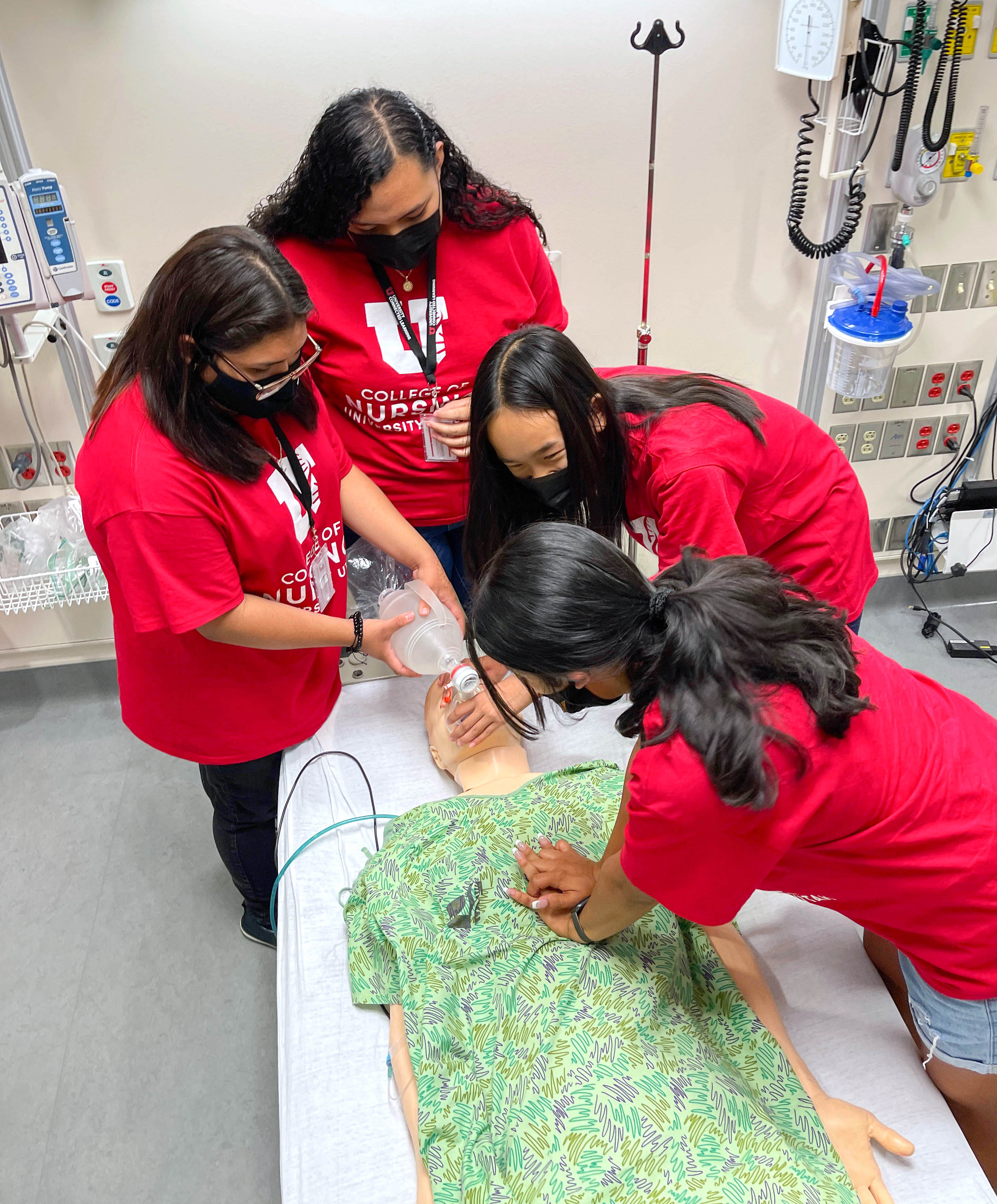 A parent’s dinner was another important event on the camp schedule.

“We scheduled a dinner so we could engage with the parents of the kids attending the camp,” said Allen. “We wanted the opportunity to speak to the parents about the ins and outs of how they could help their kids accomplish their goal of going to college.”

To reach their target audience—ethnically or racially diverse students between the ages of twelve and sixteen—Cluff reached out to the Community Faces of Utah (CFU). CFU partners with different health organizations across the state to find better resources for communities who face inequalities in health care.

Thanks to CFU’s efforts in spreading the word about the camp, the applicant response was overwhelming. More than 117 applications were sent in. Even after the application window ended, parents and school counselors reached out to Cluff every day until the camp started. This year, the camp could only accept ten students, but the NWD team aims to expand enrollment in future years.

Cluff, along with two nursing students and one alumna, ran the camp. Allen and Flattes were also involved with various activities throughout the camp.

“I really wanted to be involved as much as I could. I wanted to talk to the students, encourage them, let them meet me, and know that if I can do this, then they can too," said Flattes. “So many of these young adults are underserved, and a camp like ours can truly be life changing. I can remember when I was middle school age, going to summer camps and meeting people who looked like me, doing something different than I thought I could ever do. That’s my message to students who are racially or ethnically diverse: We want you, and you belong here.” 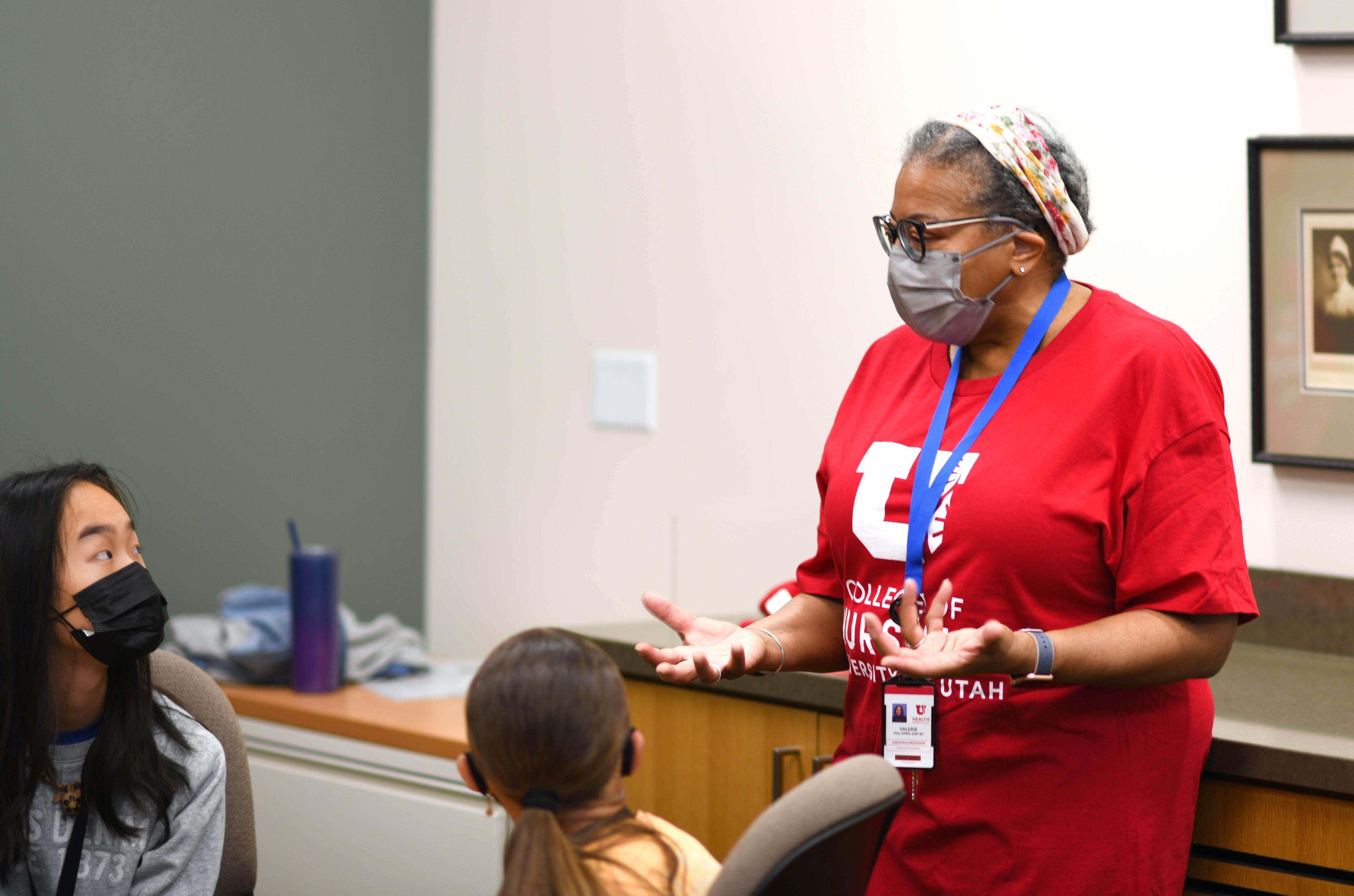 Flattes has already secured funding for next year’s camp.

Although Cluff was at the helm with the support of Allen and Flattes, there were so many others who made the camp a success.

“There was nobody I asked to be involved who said no, and every single person stepped up to the plate,” said Cluff. “It was spectacular. Whether it was the CON, the Eccles Health Sciences Library, the sim center, the Office of Admissions, dorm tours, or the affinity groups, everyone went all out for the students.”

At the parent’s dinner, the University of Utah Office of Admissions and CON leadership presented information on how to submit a college application and how to apply for financial aid.

“We are doing a major disservice to these students if we get them hyped about going to college and becoming a nurse, but not giving their parents all the tools and resources they need,” said Cluff. “We wanted to get the parents on board so they could see that it’s a very real possibility for their kids to attend college.”

Mai See Xiong, a refugee student who recently graduated with a Master of Science in Nursing Education degree, also spoke at the parent’s dinner. For Xiong, getting the parents involved was the most important part of the camp.

“It is important to get parents involved and understand the process of what it takes for their students to get into the nursing program,” said Xiong. “It also allows them to know how to support their students.”

Xiong was happy to share her story, to help others from diverse backgrounds know that they can go to college and be successful.

“I want to make sure they know that they can do it—regardless of their upbringing and living conditions. Sharing my story gives others a realistic perspective that someone that has similar passion, struggles and/or family dynamics can do it, so they can do it too," said Xiong. 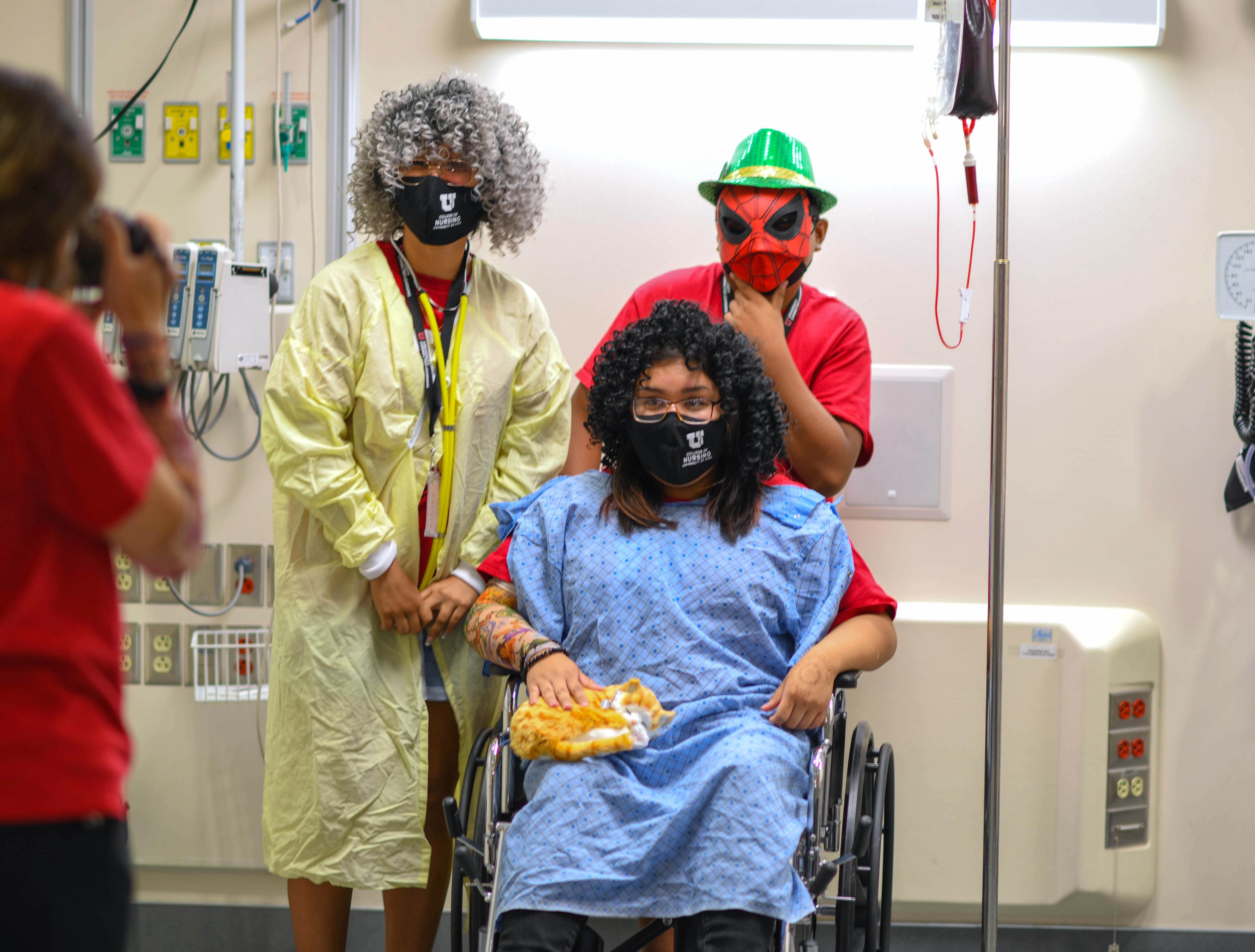 Current baccalaureate student, Lexi Moratalla, volunteered at the camp and loved seeing the kids’ faces light up as they explored the college campus.

“Many students with diverse backgrounds are told by family or even teachers before they even reach high school that they may be better off going to trade school or just entering the workforce rather than attending college at a university and pursing a degree,” said Moratalla. “A camp like this can inspire children and their families of the opportunities available to them to pursue their future endeavors.”

Moratalla drew upon her personal experience as she volunteered at the camp.

“Being a Filipino student, I knew this camp would also be a great opportunity to talk about diversity and the increasing need of diversity within the nursing field,” said Moratalla.

For everyone who was involved in this year’s camp—staff, the volunteers, the students, and their families—the future holds limitless opportunities. For Cluff, it doesn’t matter where the campers attend college or what major they choose to pursue.

“People have asked me what I hope comes from all of this, and my biggest dream is that five to ten years from now, many of these campers are in college," said Cluff. "I remember being that kid who thought college would never be a possibility. I ultimately ended up in college because someone took me under their wing. That’s what people need—they need someone to guide them, and we gave them the guidance they need to do this, and to be stronger than the negative messages they receive.”

Feedback from both the students and their parents has been positive.

“We got a note from one of the parents whose daughter attended camp,” said Allen. “Her daughter is biracial, and she didn’t know if she was going to fit in at the U. However, after attending the camp, she was able to say ‘yeah, I belong here’.”

Cluff is hopeful that these connections will improve the trajectory of every student who attended the camp, equipping them with the knowledge they need to successfully navigate any challenges or discouragement they may face.

“When the negative messaging around their future inevitably starts coming, my hope is that these kids can say ‘the University of Utah told me I could do it, so who are you to tell me I can’t?’.” 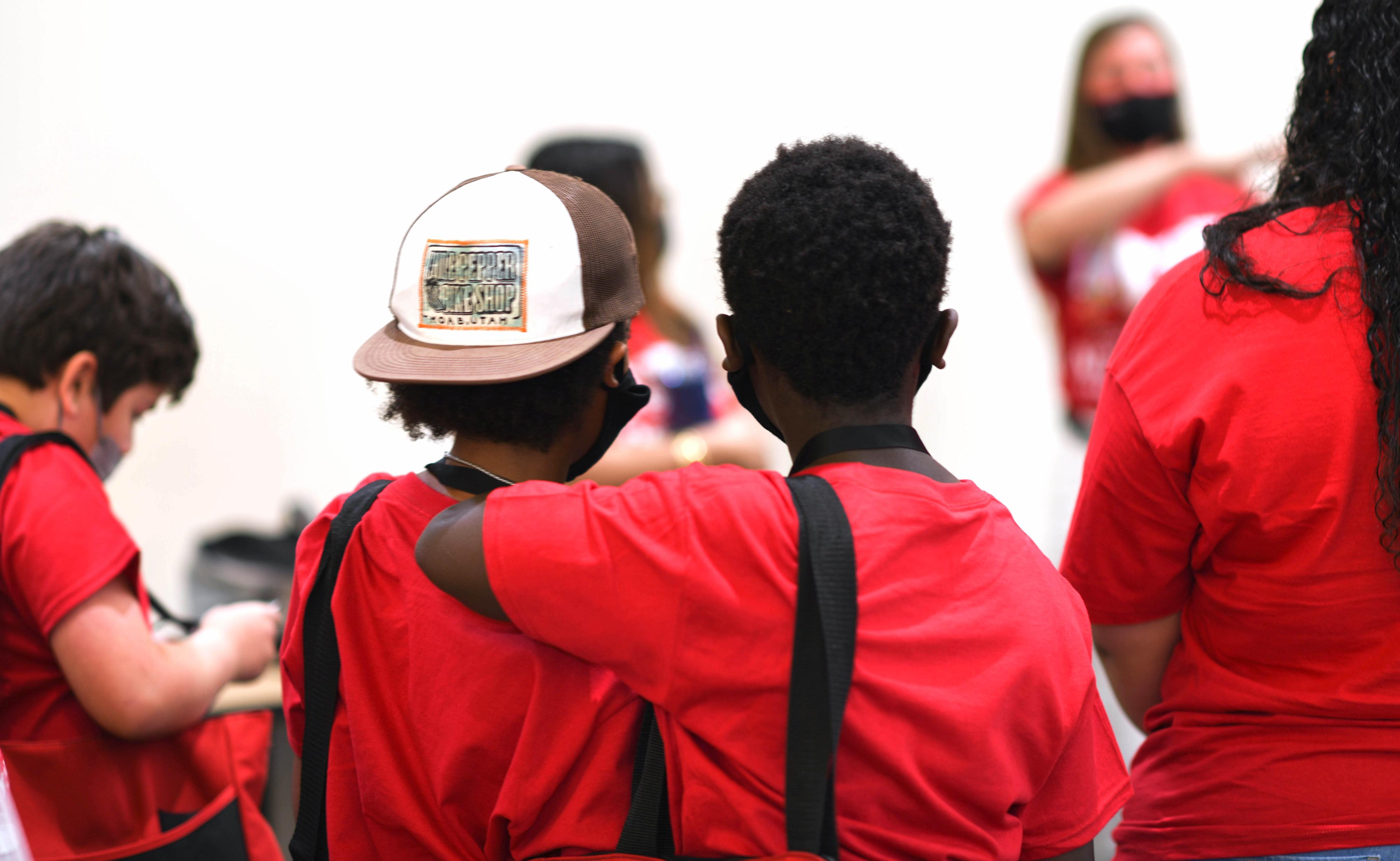